Trump, Russia and the CIA 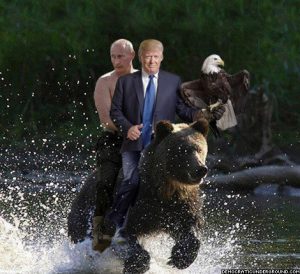 In 2012, there was substantial outrage about Russia placing restriction on foreign financing of NGOs and unions which was spurred by the fact that there was significant funding by the United States. The Western media were almost uniformly appalled that such restrictions would be placed. I remember reflecting at the time on what the media angle might be were the roles reversed. What if Russia had tried to interfere in US politics by funding opposition forces? I surmised there would be immediate calls of treason and the response would be at least as intense as the one for which Russia was being condemned.

Well, it turns out I wasn’t wrong in this prediction. The current scenario demonstrates the asymmetry nicely. Russia is currently being accused of hacking the US to subvert the election. This claim is being made by both the power centre of the Democratic Party and by the CIA and is now being featured as a media headline in the Washington Post, the Guardian and other major media outlets.

It’s certainly likely that Russia’s security state is involved in hacking exercises in the US. The US is involved in vast numbers of cybersecurity attacks in Russia, including promulgating some of the most sophisticated worms and viruses ever caught in the wild, so it would only stand to reason that the Russians would be concerned to be competent at cyber-warfare themselves. However, for this specific claim of hacking the DNC or Hillary’s e-mails, we’ve been given virtually no evidence, and the evidence that was supplied is unconvincing to anyone with even passing familiarity of computer security.

But even if we accept that the Russians did directly hack the DNC and/or Hillary, the claim of Russian hacking to subvert the election appears to resolve to Russia having introduced too much transparency into the election. The claim is that Hillary and the DNC were disadvantaged by the leaking of information which demonstrates conclusively what they actually think. That we were swayed by knowledge of the internal Machiavellian machinations that Hillary and co. engaged in to ensure that the Democrats remain firmly in the hands of the billionaire elites and her involvement in creating chaos in the Middle East.

How can any progressive believe that we would all be better off if the real internal nature of the Democrats was opaque to the voting public? The only apparent argument is that this is unfair as there were no leaks about Trump. But what is there to be leaked? The guy was apparently raping people, involved in numerous criminal lawsuits, a xenophobe and an unabashed oligarch. All of this was in the public domain and widely advertised by the media. For my own part, I’m quite confident that there isn’t much that could have harmed Trump which was not already mobilised by the media.

If all of this weren’t bad enough, the CIA are one of the major contributors to the story of Russia as hostile foreign force. They backed Hillary all the way because she represents the interests of empire. She, in her position in the State department, proved a competent administrator of the world system of American military hegemony. Trump is widely hated by this group precisely because he is not considered to be an effective imperialist. The CIA and the rest of the security state have an interest in the centrist elite that Hillary represents and so it is not even slightly surprising that they support her in opposition to Trump.

Aside from the CIA having a stake in the outcomes, their function is precisely to distort truth. One of their core missions is disinformation in the interest of continuing American power. They have lied and lied repeatedly.They are responsible for decades of interference in democratic elections all over the world, often in support of brutal right-wing dictatorships. Being credulous of their claims speaks of either deep ignorance or calculated malfeasance.

We appear to be entering a stage in which the CIA’s operations are, once again, turning inwards to influence politics in the US. This direction could accelerate especially if Trump is bold enough to try to actually dismantle NATO relationships or move the US towards a truly isolationist policy. The well-studied techniques of subversion of democracy abroad can easily become subversion of democracy internally.

The exhortations to patriotism and demonisation of Russia are extremely dangerous. It amounts to siding with the American security state in their aim of keeping a tight grip on world power. This narrative of Russian interference helps to create an “other” that the elites can use to justify the status quo and continuing on the path of growing inequality. It is a narrative which says: “The real threat is abroad, and those who don’t side with us are foreign agents.” If this story goes unchecked, it will be mobilised even more effectively against Socialists than it is currently being mobilised against the Right. It may seem convenient to go along with Hillary and her CIA friends at the present moment as a ballast against Trump, but it will not serve us well in the end.